Devin is probably best described as the ‘chaotic but enthusiastic’ tourist. When traveling, she usually decides in the morning what she is going to visit or do the rest of the day, and even that plan might change, because she can’t say no to a little adventure.  According to Devin, ‘the spontaneous trips are the best’. She always tries to put as much activities as possible in the time she has, especially the rather uncommon things. She will make it her personal mission to find something cool and rather unknown to do this trip!

When Charlotte travels, she’s best described as the person that wants to takes pictures of everything. Whenever she goes on a trip somewhere she’s always walking ten meters behind the rest because she “just had to take another picture of this nice thingy!”. And of course right then the view is blocked by all these annoying tourists… Besides this, that she doesn’t mind walking very far to see the nicest spots. Where others are tired already and have to sit down somewhere, this vice-chair is up for walking for a few more hours. Unfortunately, she isn’t the best map reader, so it is probably best if another member of the committee navigates.

Tim is the most unexperienced tourist of our committee. Except Amsterdam and some other common cities in Europe he hasn’t seen anything of the world yet. Off course, Nijmegen is the most beautiful city in the world, but he is looking forward to discover another beautiful place with the city trip. Still no one understands why Tim has been chosen as the secretary of this committee since his English skills are best described as… uh… creative?

Florian is the kind of tourist which first googles the nicest coffee places, when arriving in a new city. Besides doing all the typical touristic stuff he always tries to look for some off-the- path things to discover. Especially, he loves recommendations from locals. The last two years he travelled quite a bit, most of the time backpacking, so he knows how to live on a budget and where to find the cheapest but best beer. That’s why he is the treasurer of the committee!

Leonie is the promotion officer of the committee. She’s gonna convince everybody to not miss out on the superamazing location we’re going to this year. Leonie is the tourist who loves to figures out everything about the destination they’re going to, because she like the anticipation for the trip almost as much as the trip itself. For example, she’ll already spends hours on Tripadvisor to look at the best restaurants, because she doesn’t wanna miss the best food in town! Also she spends multiple days on Pinterest and other sites to look up the nicest activities, to make the best out of the trip!

Joli is what you would call an ´experienced tourist´. When she goes to a city, she will sort everything out about the city beforehand. She plans the whole trip step by step, but of course things never go the way she expects them to go. When Joli visits a city, you will not see her without a camera in her hands because she likes to take a lot of pictures, as a nice memory of the trip. Souvenir shops are her place to be in a city, so she can buy unnecessary junk for way too much money. Google maps is her best friend, because she often gets lost looking for all the hotspots. You can probably tell she is your typical tourist! 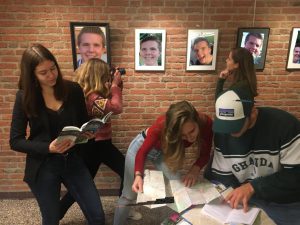